Australian fashion could be a major contributor to economic recovery

It looks as though investors could be on the money if they’re putting it into the Oz fashion industry, now being acknowledged as a significant contributor to the nation’s post-covid economic recovery.

According to a Fashion Evolution: Farm to Fashion Report there is potential in Australia to create a $38b industry and 575,000 new jobs over the next decade.

Yet many Australians have tended to overlook the importance of this industry which already employs 489,000 people (77% women) – more than all employees in mining and utility industries.

The fashion report says Australian textiles earn a handy $7.2b a year in exports.  Hardly surprising given that Australians are the second highest consumers in the world per person of textiles, and Australian textile producers are therefore keenly aware of what constitutes an appealing textile worth marketing globally.

Also, according to the report: “Until now, the comprehensive value of the fashion industry’s economic contribution – and its predominantly female workforce – has not been fully recognised.”

Which of the following three products would you consider of most value among Australia’s exports, beer, wine, or fashion?  Wine? That’s what most people have said when we from Macks Advisory have quizzed them.

Fact is, Australian fashion, currently a $27b industry, has more than twice the export valuable to the economy of either beer or wine.

In this context it’s interesting to note about 60% of Australia’s wine is made in SA, that wine is among the state’s major exports, and the value of SA’s wine exports is more than four times that of any other state.

But of course, while SA’s current stake in the nation’s fashion industry comes nowhere near to matching its highly significant contribution to wine exports, the reputations of iconic R.M.Williams and couture’s Paulo Sebastian are nonetheless trending upward internationally.

The latter company’s designer Paul Vasileff who was 2017 Young Australian of the Year, and who has since been prominent at London and Paris showings of his collections, has also become a familiar name to thousands of South Australians made newly aware of his US Disney link following the recent Adelaide Fashion Festival finale at Torrens Parade ground.

And photos of Paulo Sebastian dresses were featured on the front page of The Advertiser on 27 May.

Some plaudits for the industry

Macks Advisory understands the Australian Fashion Council is confident the industry has room to grow, and the Fashion Evolution report, referred to earlier, recommends a return to manufacturing in Australia to create a circular and sustainable economy in fashion.

“With women’s economic security now front and centre of Australia’s policy agenda, and with women representing more than 77% of the industry’s workforce, the fashion and textiles sector can play a pivotal role in advancing gender equality in our country.

“As one of the very few manufacturing industries powered by women, we need funding to identify critical skills shortages and opportunities.”

The number of women employed in fashion is almost double the representation that recent research has revealed in most other industries.

Australia has two large international fashion companies, (Billabong and Rip Curl) both none too surprisingly focused on surfing apparel. Billabong, with a market value of $1.5b has annual revenues that exceed $1.1b and is the largest public company in the clothing industry.

According to Australia’s Trade and Investment Commission, the nation’s clothing industry annually exports about $2.9b worth of wool, and cotton worth another $2.5b.

Reported research by the Australian Fashion Council in collaboration with Afterpay reveals the escalating effect of a diverse industry which makes a direct $16.3bn and an indirect $10.9b contribution to the economy by way of a complex ecosystem.

The report indicates how significantly the fashion and textile sector drives regional prosperity and tourism growth, given its universal retail presence in shopping centres and main streets.

It also highlights the need for further investment from government and business in reskilling talent to ensure workers have future-ready skills to meet the demands of new technology and more complex models of design, production, and retail.

SA is pulling its weight

On 25 and 26 May the SA National Innovation Games brought together 20 teams of 150 experts in Adelaide aiming to develop sustainable solutions for operation of the fashion economy in Australia.

Their ideas had to be practical, scalable, easily implemented, spanning the product lifecycle from material selection to design, certification, product sourcing, manufacturing, and supply chain management. They also had to accommodate use behaviours and problems of eventual waste (product end of life).

Because globally textile, clothing, and footwear production accounts for 8% of greenhouse gas emissions and 20% of water waste, SA Minister for Industry, Innovation and Science Dr Susan Close, says she wants the state to provide solutions to these problems rather than contribute to them.

Funded by the Australian Government and with delivery support from the Council of Small Business Organisations of Australia (COSBOA), the Games were co-sponsored with the Australian Government by the SA Department for Innovation and Skills, the SA Department of Environment and Water, Green Industries SA, Flinders University, TAFE SA, Holiday Trading, City of Adelaide, Acler, and Image Works Consulting.

Macks Advisory is aware that increasingly consumers want to be informed about where and how their clothing is made, and we suggest that if the industry is to develop attractively and profitably, a satisfactory response to this must include evidence that sustainable environmental and humanitarian solutions are being found to deal with their concerns. 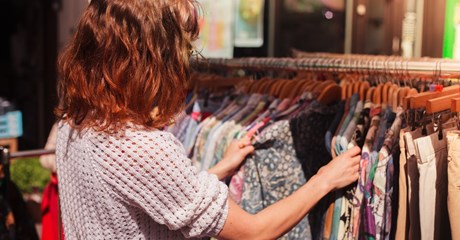