Wine industry will survive $1.3b loss of China market

While the Australian wine industry’s loss of its annual $1.3b market in China is painful – it is expected to result in a “blood bath” for grape growers next year – the situation, according to chief executive at Australia Grape and Wine Tony Battaglene, “is not all doom and gloom, and we’re going to survive”.

In a comprehensive review of the industry presented in Adelaide at a Rural Media & Communicators SA/NT forum, Mr Battaglene said China’s 218.4% tariff on Australia’s bottled and packaged wine (under two litres) is expected to be maintained for the next five years.

Australian producers have excellent relationships with appreciative Chinese distributors and consumers, and the punishing tariffs are not simply a by-product of political tensions.  “As soon as there is opportunity, we will pivot back into China but will be very careful how we go about our business”.

Mr Battaglene said it is not widely understood in Australia that both demand for and consumption of wine in China “have actually been dropping for a number of years” as consumers’ tend increasingly to favour quality wines.  China’s domestic wine producers, disadvantaged by this trend, claim other countries with government subsidised wine industries have also adversely affected them, but consequent import restrictions imposed on these countries have had nothing to do with political tensions.

While he understands Australian wine producers’ inclination to “follow the money in China”, Mr Battaglene said this has resulted in neglect of some 100 international markets – notably South Korea where “we really dropped the ball”, and generally in south-east and north-east Asia.

Post Covid-19 prospects for strong growth in the UK are good “but we need to have long-term structural change in our sector to get premium wines into places where we don’t have market share now”.

Successful diversification depends on gaining access to new or under-developed markets, so that wine producers, particularly those who have had “all their eggs in one basket” in China, will have to restructure their businesses in order to build cultural ties, connections and distribution networks in other countries.

Towards this end the industry is not “looking for a one-year or two-year year sugar hit from the Federal Government, but decades of partnership”.

Mr Battaglene said it “scares the hell out of me” that “continually, regulatory impulses are put on us in Australia, that a reprehensible and disappointing anti-alcohol lobby will seek opportunities to attack a currently weakened wine industry”, and that this will impede efforts to grow markets and open new ones.

Worries ahead for grape growers

In his opinion China’s tariffs and the COVID-19 pandemic have inflicted “a world of pain” on Australia’s wine industry, which next year will result in a “blood bath” among grape growers, especially those who have been major growers for premium wine producers heavily committed to the China market.

Grape growers, after getting “great prices this vintage”, are now faced with “a significant drop in prices across the board”, because finding new outlets for $1.3b of lost sales in China that targeted mostly premium wine distributors, is going to be a slow, long-term project that will erode producers’  profits in years ahead.

Grape growers particularly in warm inland regions, in Langhorne Creek, Barossa Valley and right through much of the rest of SA, will be coming under most pressure, so industry leaders and governments have “a great deal of work to do”.

Though facing the imperative of major structural change throughout the industry, wine producers believe it will survive and most want to remain in it.

All is not “gloom and doom”

COVID-19 lock-downs and restrictions that have prevented people going to pubs and other places where wine is sold has meant “consumption of off-premises wine has been very high”, so that in some markets, particularly in the UK, growth has been good. [Australia’s wine exports to the UK grew by 33% in the first quarter of this year and are expected to grow significantly under the trade agreement announced last month.]

Furthermore “the way everyone in Australia has been doing their bit to boost domestic sales is fantastic, and cellar door sales can only get better as travel restrictions are eased and incentives to travel take effect.

Even before this last vintage -- a cracker, and the first good one in four years -- many places had sold out of wine, and those businesses not relying on export, not relying on big retailers, have been doing quite well and will continue to do well if they restructure their business plans and get that right.”

Encouraging consumers to opt for the premium wines on which the Australian wine industry has pinned its future, is going to be a long, slow and sometimes difficult process, and export will always be key to major wine producers’ success that can be secured by the Federal Government’s active support.

In a statement following the forum, Mr Battaglene praised the government’s willingness to take the wine industry’s fight against China’s tariff impositions to the World Trade Organisation (WTO) because of “serious harm” caused to the industry by the Chinese Government.

Despite assurances from Australian producers that they have not been dumping wine in China and receive no government trade-distorting subsidies, sales there of quality Australian wine are now virtually impossible because of tariffs as high as 220%. They have dropped from more than $1b a year to about $20m.

Mr Battaglene says it is nonetheless “fantastic” the Federal Government has indicated willingness not only to appeal to the WTO about this but also to engage in talks with the Chinese to resolve the issue.

Following a recent Rural Media & Communicators SA/NT Forum, China – a perspective from the beef and wine industry by panellists Tracey Hayes, former CO of the NT Cattlemen’s Assoc and Tony Battaglene, CE of Australian Grape and Wine Inc, Macks Advisory, as a corporate member of the organisation, has been granted permission to produce this newsletter  using content from the Forum.  The Forum was filmed on 29 April 29 at the Adelaide Showground. The full presentation can be viewed via the RMC YouTube page via this link  or the RMC Facebook page via this link.

Our sincere thanks to Rural Media & Communicators SA/NT. 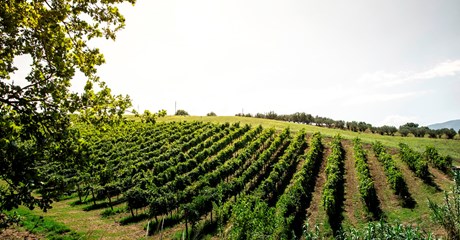