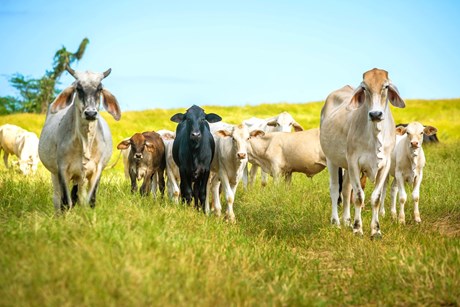 Australia is rebuilding its beef herds in the aftermath of devastating and prolonged nationwide droughts, and despite serious “market and technical access issues” with major customer China, the industry’s future is promising, according to Tracey Hayes.

The first female CEO of the Northern Territory Cattlemen’s Association (an interesting conflict in terms) she has been named as one of Australia’s 100 Women of Influence, and was a facilitator of the class action that won some $600m in compensation for cattle producers following the 2011 Labor Government’s livestock trade ban with Indonesia.

Ms Hayes told a Rural Media & Communicators SA/NT forum in Adelaide  recently that the nation’s beef and live cattle industry is meeting formidable challenges head on to retain its position as the nation’s largest agricultural exporter.

According to Ms Hayes, if iron ore is taken out of the equation, Australia’s overall trade with China alone dropped 40% last year and on average 22% globally.

The yin and yang of getting the beef industry’s trade with China stabilised and growing, is a formidable challenge.

While Australian beef producers can expect serious competition from major producers in South America, Ms Hayes believes that because the Chinese place such value on the integrity and quality of imported food – especially in the light of “multiple food scandals” – Australian producers can become favoured suppliers in a climate devoid of political tension.

Increasing affluence among populations in Vietnam and Indonesia also marks these countries as potentially valuable markets for Australian beef.

The boon of dietary change

According to Ms Hayes, in years ahead Australian beef producers will be significant beneficiaries not only of increasing affluence, but of dietary change throughout Asia.

Historically pork, chicken and fish have been staples of Asians’ diet, but beef and lamb are attracting ever widening interest.

The increasing consumption of beef, particularly along China’s east coast has been “extraordinary”.

African swine fever, a deadly and highly contagious disease that has destroyed vast populations of pigs throughout Asia - notably in China - has tended to encourage dietary change while discouraging pork producers.

Ms Hayes warns that because the disease has reached Indonesia and Papua New Guinea, biosecurity officials will need to be constantly “on their toes” to keep it out of Australia.

Mutant strains of African swine fever are making it difficult to produce an effective vaccine, so it is inevitable the disease “will be with us for a long time to come”.

This will tend to increase Asians’ shift from pork to red meat, which is likely to put increasing pressure on Australian suppliers.

Pointers to the future

In the aftermath of drought, as beef producers rebuild their herds, “not everyone is out of the woods” even with the boost of “a terrific wet season in northern Australia”.

Ms Hayes says beef producers are retaining females in all herds to accelerate breeding, and demand for any in the market is “red hot”.

As the herd rebuild goes to “around half a million headers” there is upward pressure on pricing, which is also “red hot” for sales of land suitable for beef production.

It Is unknown how much longer China’s objection to labelling of some of Australia’s meat products will continue to prevent sales by Australia’s export plants.

“This has created some issues for us, and of course the increased screening at ports and distribution channels, together with the testing and checking of frozen imported products, has created bottlenecks.

“It’s been a major cause of the reduction of inflows [of Australian beef] into China.”

Factoring in the politics

After increasing 600% over 30 years, Australia’s beef and cattle exports have been stalled by the Federal Government’s questioning of China’s expansion of boundaries of economic and strategic influence.

“Current tension and competition will continue and possibly increase.  We’ve seen things tightening and closing, and certainly with Australia’s more forthright stance on humanitarian and sovereignty issues, a change in Chinese diplomats’ language.”

This, Ms Hayes says, has been a public relations loss for China, and will likely result in increasing strategic cooperation among an increasing number of countries aligned in opposition to its overt desire for economic and military dominance.

Under terms of the trade agreement with the UK signed last month, a gradual reduction in tariffs over decades will help to brighten the future of Australia’s beef exporters.

In this situation, combined with increasing Asian affluence and desire for meat products, the industry’s prognosis looks good.

Following a recent Rural Media & Communicators SA/NT Forum, China – a perspective from the beef and wine industry by panellists Tracey Hayes, former CO of the NT Cattlemen’s Assoc and Tony Battaglene, CE of Australian Grape and Wine Inc, Macks Advisory, as a corporate member of the organisation, has been granted permission to produce this newsletter using content from the Forum.  The Forum was filmed on 29 April 29 at the Adelaide[KH1]  Showground. The full presentation can be viewed via the [KH1] RMC YouTube page via this link  or the RMC Facebook page via this link.

Our sincere thanks to Rural Media & Communicators SA/NT.