Maybe there won’t be a tsunami of post-pandemic insolvencies

Six months ago insolvency practitioners and economists were warning of an inevitable post-pandemic tsunami of insolvencies.

Now pundits are prepared to put their names to media statements saying variously that if there is to be a wave of insolvencies, it won’t be triggered immediately by the shutting down of government financial support programs, will be much less of a wave than forecast, will do less damage than predicted, and may not even eventuate.

Before he attended the ADC Forum’s Australian Leadership Retreat in Brisbane this month, Mark Delaney, who oversees investment strategy for AustralianSuper (the nation’s biggest super fund) went on record with a series of astonishingly positive assertions, among them that “many people aren’t yet aware we’re on the threshold of an economic boom”.

(ADC Forum is an Australian, non-political, not-for-profit leadership organisation which brings together leaders from business, government, the public sector, academia and the broader community to improve their understanding of key issues affecting Australia. The Australian Davos Connection became the ADC Forum in 2010)

Elements of the “boom”

Mr Delaney, Australia’s most powerful money manager, says the boom, yet to be appreciated by the general population, has been fuelled by unprecedented levels of stimulus and central banks’ wait-and-see attitude to dealing with inflation.

He says he’s unworried for Australia by an increase in US bond yields. He believes at some stage of a 10-year bond interest rates tend to normalise, and that “any sell-off in a bond market is the brightest indicator of sentiment changing around a recovery, and that’s not fear”.

For example, adoption of new technologies will continue to depress inflation.  The flow-through from the strong market labour market to wages remains very weak, but if inflation is to resurface as an issue, it’ll be slowly, not rapidly.

Noting the Organisation for Economic Cooperation and Development (OECD) predicts Australia’s rebound from COVID-19 will this year be indicated by a 4.5% in GDP growth – the strongest since the 2012 post GFC growth of 3.9% -- Mr Delaney says it’s a phenomenon clearly appreciated by a rising stock market, but leaves businesses and people generally unsure of how to deal with it. (The ASX is up 45% from lows of a year ago.)

Of $40b of government financial support on offer to businesses for most of 2020 and into this year, only about $3b had been taken up by the end of the March quarter, which means $37b was at that stage available for what in effect is now JobKeeper 2.0, and accordingly of significant benefit to those businesses and workers still doing it hard despite the economy’s widespread recovery.

Loans of up to $5m (previously only $1m) are now available for businesses that were getting JobKeeper support through the March quarter, and that have annual turnovers of up to $250m (previously it was $50m).

Most significantly, the government now guarantees 80% of the program’s business loans compared with 50% previously.

No wonder NAB’s Ross McEwan said in a recent media interview that the updated program  was “a thoughtful extension with significant increases in all key components including eligibility and loan size”, sentiments echoed by ANZ’s Shayne Elliott who gives JobKeeper 2.0 his “full support”.

Because taxpayers are up for 80% of the risk of these loans, and banks only 20%, eligible business owners can now expect to get loans very much more easily -- loans for which banks can no longer require a mortgage on the borrower’s house, previously a common requirement for loan applicants who had smaller small businesses.

This may slightly increase banks’ risk, but they’re now having to carry only 20% of the risk on these loans instead of 50%, and they can charge up to 7.5% interest on them while borrowing billions of dollars at an interest rate of 0.1% from the Reserve Bank of Australia (RBA) -- which expects that rate to remain unchanged for the next three years.  It’s hardly surprising banks are happy and recruiting staff.

UBS chief economist George Tharenou forecasts GDP will reach “pre-COVID levels” between July and September, and CBA chief economist Stephen Halmarick says as far as employment is concerned “we should within a few months be back to where we were pre-pandemic”.

Treasurer Josh Freydenberg expected a possible loss of 110,000 jobs when JobKeeper ended, but now says the effect of that on employment trends would be “very temporary”.

Last month the states announced various measures to ease financial pressures on SMEs, many of which have been pushing quietly ahead reorganising and restructuring to the extent they’ve been able to cut costs by up to 20%.

Many are in better shape than expected, are looking to increase bank overdrafts to fund equipment and possible expansion, are securing supply chains by becoming less dependent on imports, and seeing marked improvement in cash flow because big businesses are now required to pay their small suppliers within 20 days.

Later this year it’s likely we’ll see the start of a wave of insolvencies -- zombie companies kept on life support by governments’ pandemic aid programs after costing the economy up to $5b annually for years, these together with other businesses never basically sound.

But a tsunami is a whole lot more than a wave and because a whole lot more businesses now seem likely to survive in a stronger and more rapid post pandemic recovery than predicted, the predicted unavoidable tsunami may in fact be avoidable. 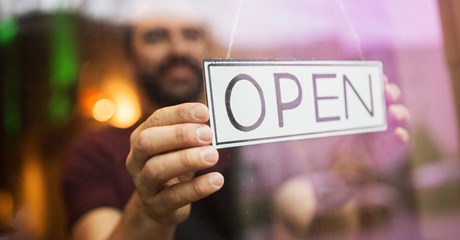